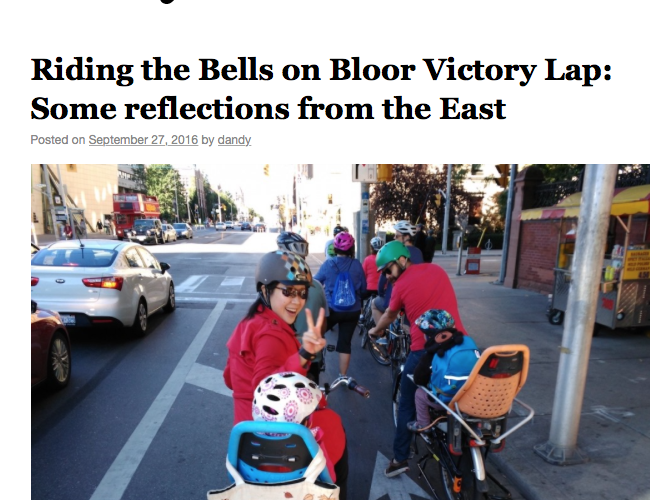 Home » NEWS » General » Dandyhorse: Riding the Bells on Bloor Victory Lap: Some reflections from the East 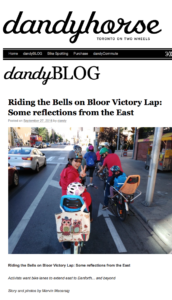 “Firstly, riding on Danforth and the sections of Bloor where no cycling infrastructure currently exists presents several challenges as automobile traffic moves faster and the overall width of the road (and bike lanes) are inconsistent. I need to continually be alert to the possibility of motorists in parked cars suddenly opening their door into my path. Other hazards include uneven pavement, potholes, and large vehicles. It is very easy to understand why both experienced and casual cyclists would simply avoid this route, as riding it requires a certain level of both skill and ability.

Secondly, on the Danforth where there are no bike lanes, I often see cyclists riding on sidewalks especially in East York and Scarborough. This presents obvious safety issues for all sidewalk users. Regardless, this is the reality despite a City of Toronto bylaw that states, “no person age 14 and older may ride a bicycle on a sidewalk.”

Thirdly, riding the Bloor bike lanes provides me with a much different experience than riding on the Danforth. After the bike lanes were installed, I have noticed that I am riding at a slower pace, which gives me more time to see interesting places and identify shops and businesses. The bike lanes also makes the behaviours of both drivers and cyclists more predictable which is always better for safety.”

This is an excerpt of a blog post in Dandyhorse magazine written by TCAT’s Scarborough Cycles Project Coordinator Marvin Macaraig.