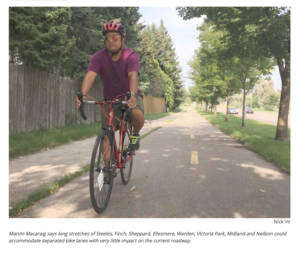 “Cycling has become so popular in Toronto that to ride is to conform – well, downtown, anyway. In the burbs, there’s still work to do.

Some 2,000 cyclists have been served by the hubs and hundreds more turned on to biking via the project’s group rides, which Macaraig says have been key to “normalizing” cycling and building bike culture in the burbs. He says the rides have acted as “a public statement of community ownership and belonging” for cyclists.”

Read the full article, “Scarborough is shifting attitudes on cycling: From suburbia with love for the bicycle”