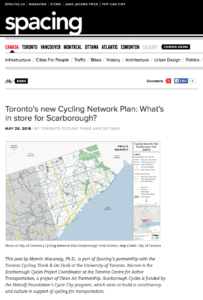 On May 16th, the City of Toronto Public Works and Infrastructure Committee (PWIC) recommended that City Council increase annual capital funding to $16 million for the proposed Ten Year Cycling Network Plan. This figure was recommended by Transportation Services staff and roughly doubles the City’s annual spending on cycling infrastructure. The plan calls for a total of 525 km of new cycling infrastructure throughout the city, including 280 km of bicycle lanes or cycle tracks on what the staff report refers to as ”Fast, Busy Streets”, 55 km of sidewalk-level boulevard trails also along ”Fast, Busy Streets”, and 190 km of cycling routes on ”Quiet Streets”.

This $16 million of cycling infrastructure investment is encouraging, however it should be noted that PWIC members also voted to put on hold all of the planned eight major corridor studies (with the exception of three short segments on Bloor St. and Yonge St.), representing 100 km of the 525 km of cycling infrastructure. Members argued that this would allow time to gather feedback and data from the Bloor St. bike lane pilot project scheduled for installation in fall 2016, and provide an opportunity for upper levels of government to fund these future studies.

This is an excerpt from an article published in Spacing, written by Marvin Macaraig, TCAT’s Scarborough Cycles Project Coordinator. Read the full article here.