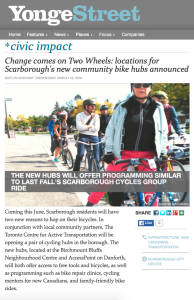 “The sites were chosen after an extensive mapping exercise conducted in partnership with the University of Toronto’s Cycling Think & Do Tank. Marvin Macaraig, TCAT’s Scarborough Cycles Project Coordinator, says that some of the parameters they measured included the number of trips currently taken by bike, local car ownership levels, and proximity to key transit outlets. ‘We also considered existing and future infrastructure. In the city’s ten-year plan, they’ve identified Kingston Road and Danforth as corridors, and both these hubs are a stone’s throw away from those corridors.’”